TRAIL TO TRAIL…AND THEN SOME.

This is the bike so many have been waiting for. The one serious riders have dreamed about. A true street-legal dirtbike that offers the reliability, refinement and quality of a Honda, along with the light weight, handling, and power of our best off-road machines. Introducing the new 2019 CRF450L. Sure, you’ve seen dual-sport bikes before, but this is something much, much more: a true trail-to-trail machine. Developed in tandem with our all-new 2019 CRF450X, it features a powerful 449cc Unicam engine, twin-spar aluminum CRF chassis, six-speed transmission, and premium suspension. Electric start? Naturally. All-LED lighting package? Of course. Until now, you’ve always had to choose between performance and reliability. No longer—with the CRF450L, you get the best of both worlds. And “best” is a word you’re going to hear a lot when you’re talking about this bike. 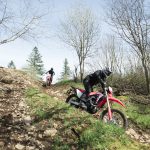 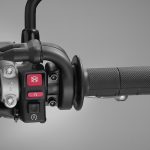 Cycle world says – When Honda released first details of the 2019 CRF450L, Honda fans rejoiced as KTM, Beta, and Husqvarna grit their teeth, knowing very well the European domination of the hard-core dual-sport segment is in jeopardy. A glance down the spec sheet and all looked great for Honda and worrisome for the big three. Until nearly the last line of the sheet—289-pound curb weight? Insert record scratch here. Fanboys held their heads and detractors high-fived. How can a combatant for the DS throne weigh in 25 to 30 pounds more than its competition? Online arguments exploded and trolls threw that number around with reckless abandon. All of the speculation and bickering can be put to rest—the CRF450L is a contender, 289 pounds or not. Built on the bones of Honda’s CRF450R motocrosser, the CRF450L branches the farthest off the family tree via the CRF450RX and most closely the CRF450X. All share the same basic architecture: a 449.7cc overhead-cam Unicam engine, twin-spar aluminum perimeter frame, and premium Showa suspension. Journey from the R model through the RX to the X and the frame gets a bit wider in the hips to accommodate a six-speed wide-ratio transmission. The rear wheel morphs into an 18-inch hoop rather than a 19-incher and the tank capacity grows by just a third of gallon to 2.01 gallons. Suspension spring rates and damping settings are tailored for off-road usage.

Ergonomics are full-on CRF. The only hint that you are on the L is the width of the tank and shroud area, underneath which are the titanium fuel tank (that is lighter than a plastic unit of equal shape and size) and the enlarged radiators with an electric cooling fan. When standing up and getting over the bar you do feel that width a bit. For only 2.01 gallons, I wish it was thinner. Or maybe I wish the tank was larger for the width. Fuel consumption on the LCD dash recorded a 44.1-mpg average, giving me a possible 90-mile range. Take it easy and I imagine you could stretch it to an even hundo.

After 102 miles of mixed trail and some street, it’s clear Honda has hit the mark with the 2019 CRF450L. Is it a game changer? For dual-sporting, no, but for Honda, absolutely. Kudos to the entire team at Honda for building a dual-sport to compete with the European offerings but in the Honda way. It’s huge for Honda to create a street-legal bike with a trail-to-trail philosophy. Mikio Uchiyama, Large Project Leader for the CRF, was on hand for the launch and was all smiles as I high-fived him and his team on a job well done. The CRF450L may be chubby, but don’t ever try to discount it of because of that one fact. It’s so much more than just a number.

The CRF450L is equipped with a catalytic converter and is fully street legal in all 50 states. That means you can ride it wherever it’s legal to operate a motor vehicle—in state and national parks, on the road, on public lands. Plus, you don’t need to haul your bike to the trailhead in a truck or on a trailer. Best of all, it makes finding gas a breeze.

An electric start system ensures trouble-free starting in all conditions. The electric starter also drives the clutch side of the crankshaft to provide superior lubrication to starter gears while producing a narrow engine with a short, strong crank.

Like our CRF450X, the CRF450L rocks a six-speed gearbox. That gives you a low gear perfect for tight, slow situations, and a top gear that’s tall enough for highway riding to the next gas stop or trailhead.

Light, compact, and offering excellent performance—just like the CRF450L itself! Conventional batteries are heavy, but not this premium piece. It’s all part of why your new CRF450L performs as well as it does.

We redesigned the CRF450L’s crank to have 13 percent more inertia than the CRF450X. Why? To smooth out power delivery and make the engine more user-friendly in tight, technical situations.

The CRF450L’s dual radiators feature a refined core area for superior heat dissipation compared with conventional dual-radiator designs. A coolant recovery tank is located in front of the engine between the frame downtubes for improved center of mass, and the tank is protected by a plastic skid plate.

Designed to keep your bike quieter while not adding any weight, these unique drive sprockets are just another example of the CRF450L’s innovative engineering.

The CRF450L is a “ride anywhere” type of bike, and because conditions vary so widely, we’ve equipped it with a light electric fan for the radiator. Rock crawling or riding on a hot Arizona single-track, it helps keep your engine running cool.

The CRF450L’s factory skid plate is light, yet also offers the engine and lower-frame protection serious riders demand on a machine like this.

The CRF450L features an all-LED lighting package, including the headlight. That’s a big deal, because it takes a lot of weight off the front end. And the lighting pattern is also specially designed for both on- and off-road situations.

The LED taillight is integrated into the rear fender. It’s light, compact and rigid.

Honda’s Unicam cylinder heads combine the best of single- and double-overhead-cam designs. The configuration contributes to a compact engine that saves weight over a comparable dual-overhead-camshaft motor and also permits a narrow included valve angle. This flattens the combustion chamber to facilitate ignition flame propagation, allowing a high compression ratio. Since less space is taken up in the cylinder head, the camshaft sits lower in the head for a more compact engine and a lower center of gravity.

The CRF450L features our proven fuel-injection system. It’s part of the reason the CRF450L offers such excellent torque and spot-on metering and response, especially in the critical low-rpm range. It also automatically compensates for elevation and weather changes.

This is the same design as our all-new CRF450X uses, and that’s a really big deal. It means the CRF450L is a true off-road bike, and not some compromise. The twin-spar aluminum frame is both light and stiff, and provides the basis for the CRF450L’s excellent handling. The chassis geometry is specially selected for responsiveness, and also is wider than the standard MX frame to accommodate the six-speed transmission.

The CRF450L’s tires give you good off-road traction and on-road life. Tires are always a critical part of any on/off-road bike, and we’ve hooked you up with some great ones here.

The compact Unicam engine and Honda’s famous concentration on center-of-mass engineering help keep the CRF450L’s center of gravity low. That means the bike feels lighter, and it helps handling too.

The CRF450L’s 18-inch rear wheel gives you an excellent choice of on/off-road tires.

Having a hard time spotting the differences between our factory MX bikes and the new CRF450L? You’re excused. The “L” looks like our MX bikes because it’s derived from them—the smooth bodywork makes it easy to move around, and the in-mold graphics not only look cool but are durable, too.

They may not help you go faster, but the sweet black DID rims sure look good.

Placing the rider’s legs at the narrowest part of the frame helps improve comfort and handling.

Hey, a sidestand may seem like no big thing, but take a look at the one the CRF450L uses. Tucked up high and out of the way, this forged alloy piece is just another example of how the CRF450L gets it right.